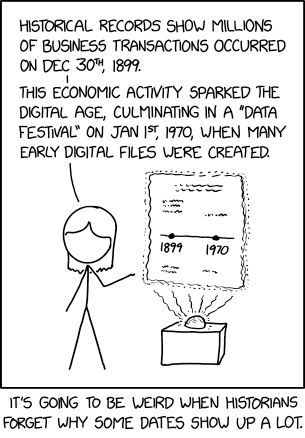 ghafarkkali
reply
KooKoo Kids is the best kidswear clothing brand in Pakistan that offers online clothes for girls and boys from 1 to 12 years old. Grab now with up to 60% off. Visit our website https://thekookookids.com

An explanation, for those as puzzled as I was:

Unix-based systems traditionally represent timestamps as "seconds since 1970-01-01". If some program requires a modification timestamp for some file and no accurate value is available, it will commonly use the value 0 as a default. When other systems carefully preserve that value, it leads to files with 1970-01-01 timestamp.

Spreadsheets traditionally represent timestamps as "(fractional) days since 1900-01-01". In the same way, asking for a timestamp when no valid information is available will often get the value 0 as a default. Since businesses run on Excel, there's a lot of transaction records with a 0 timestamp in Excel spreadsheets out there.

One last wrinkle: The first wildly popular spreadsheet, Lotus 1-2-3, had a bug: it assumed that the year 1900 was a leap year, so it assumed 1900-02-29 existed, and so every date timestamp after that point was off by one. When Microsoft created Excel, they carefully reimplemented that bug for compatibility's sake, but if you're a historian looking at the data, you might reasonable assume that spreadsheets stored timestamps as "(fractional) days since 1899-12-31". If you're storing timestamps in some different format, it might not be obvious that those are zero dates - you might assume there's just a lot of transactions processed on that day.

Having lost a mailbox this story made me smile. by /u/Molotavmandee
Sunday September 11th, 2022 at 4:38 PM

Developer creates delightful programming font based on Minecraft by Benj Edwards
Friday September 9th, 2022 at 1:13 AM

North Carolina-based developer Idrees Hassan loves Minecraft so much that he recently created a monospaced font for programming based on the typeface found in the wildly popular video game. The result, Monocraft, gives programmers the feel of being in Minecraft without using any assets from the game.

"To be honest, I made this font because I thought it'd be fun to learn how fonts worked," Hassan told Ars. "Existing Minecraft fonts were missing a bunch of small details like proper kerning and pixel size, so I figured I should make my own. Once that was done, there was nothing stopping me from going overboard and turning it into a 'proper' programming font. Plus, now I can write Minecraft plugins in a Minecraft font!"

To adapt the Minecraft font for development purposes, Hassan redesigned characters to look better in a monospaced format, added a few serifs to make letters such as "i" and "l" easier to distinguish, created new programming ligature characters, and refined the arrow characters to make them easier to read. (Ligature characters combine popular operational character strings such as "!=" into a single new character, but they aren't always popular with developers.)